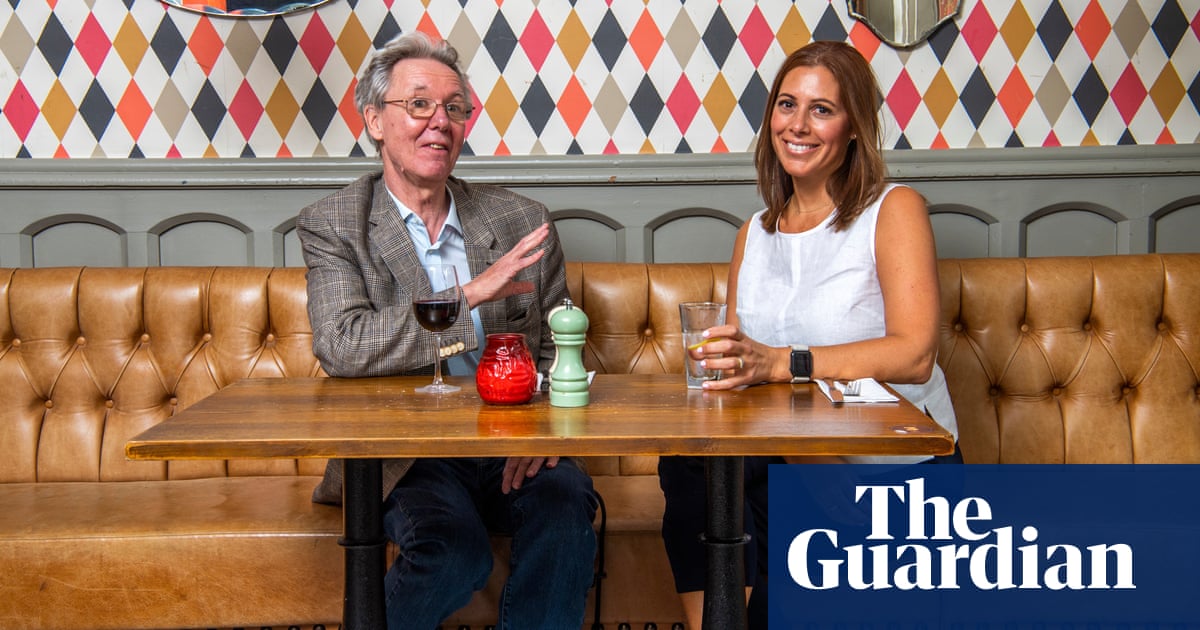 Dining across the divide: ‘He won’t stop eating meat because it’s too delicious’

Occupation Medically retired with advanced multiple sclerosis. Patrick used to be an IT consultant and travelled all over the world

Voting record Describes himself as New Labour, but voted Green in the last general election, because Labour had no chance in his staunchly Conservative Hertfordshire seat

Voting record Labour in general elections, Green in local. Not a fan of the Tories but has been impressed with the furlough scheme

Amuse bouche Laura, from Argentina, came to Britain in 1996, met someone and got married without telling her parents. She now has a different, Norwegian husband

Patrick I got to the pub and the accessible entrance wasn’t very accessible, but I’ve got a very mobile mobility scooter and Laura and the photographer held the door open so we got a nice, natural introduction.

Laura I work in customer services, I’m like that.

Patrick I had lamb. She’s vegan. I asked her if it was all right, and she said yes – she’s very obliging.

Laura My usual argument is to ask people why they make a difference between dogs and cats and other animals, but he threw me by saying dogs are stupid. I asked him if he could kill a lamb himself, as I find the disconnect between what we eat and where it comes from is the main reason people aren’t vegan.

Patrick I defended myself by saying that, as a child, I lived in Oxfordshire, and the gamekeepers from Blenheim Park estate used to bring round pheasants that we had to pluck and draw. So I was able to make a link.

Laura He said he wasn’t prepared to stop eating meat because it’s too delicious. I grew up in Argentina eating beef, so I know what he’s saying, but I can’t justify a few moments of pleasure with whole lives of torture, enslavement and suffering.

Patrick I’m the cook at home. We make a point of not eating too much meat. My daughter says eating meat all the time is not good for the environment.

Laura I feel very disheartened about the environment – it’s all going to go really badly. I do a few things that aren’t so good: I need the aviation industry to recover so as not to lose my job, but on the other hand I see people flying to the other side of the world for a two-hour meeting. I feel a bit fake, saying I care about the environment.

Laura Not that I could have afforded to send my kids to private school, but I don’t agree with them, because they cater for just a tiny sector of society.

Patrick They’re privileged. Schools like Eton, Harrow, Radley, a few others, give you a big leg up, and neither of us really approved of that. I went to a boarding school because my parents were abroad a great deal, but I didn’t enjoy it. I wasn’t very happy.

Laura I did go to a private Catholic school in Argentina, but they’re not as expensive as they are here.

Patrick She wanted to have all these statues pulled down, like Edward Colston in Bristol – everything to do with slavery removed. Fine, but you can’t airbrush history; it happened and a lot of famous people in the United Kingdom were involved in slavery, end of – it’s a fact.

Laura I wouldn’t want to see someone who traded, enslaved, took freedom from my ancestors and got rich from the act, in a place of admiration. It would make me feel that I’m not respected, wanted or cared about.

Patrick Cecil Rhodes was a very successful businessman. He was involved in slavery, but you can get a Rhodes scholarship to Oxford – do you want that to go? We agreed to differ, but it was an interesting discussion and I think we both opened each other’s eyes.

Laura I met this nice, polite gentleman, and, if I say so myself, I’m quite nice and polite, too. I had to leave and pick up my son from school.

Patrick It was the first time I’d been to a pub, or met a stranger, for 18 months – it was fabulous. It was a shame she had to leave early; I was happy to keep talking. I was looking forward to coffee and pudding!

• Laura and Patrick ate at The Boat, Berkhamsted, Hertfordshire.

Want to meet someone from across the divide? Click here to find out more