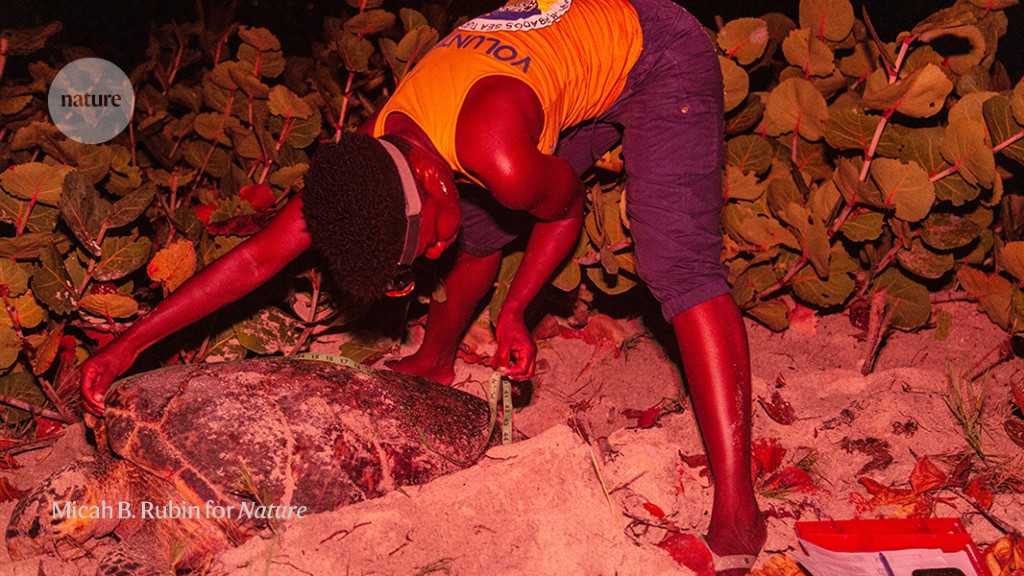 It was turtle-nesting season when this photograph was taken one night in June. I am on Needham’s Point beach measuring a critically endangered female hawksbill turtle (Eretmochelys imbricata). As field director of the Barbados sea turtle project, I run the day-to-day conservation activities and train and manage volunteers.

We also run research projects that inform our conservation activities. We collect data such as shell length, which can tell us the age at which females become sexually mature and can indicate growth rates. These data help us to keep track of turtle health and survival. For example, if we start seeing smaller turtles, this could indicate that they are maturing faster, or that food is scarce and the turtles are growing more slowly.

In August, the baby turtles hatch. I was on call 7 days a week for around 8 hours a day, responding to emergencies. These included hatchlings wandering off in the wrong direction, putting them at risk of being hit by a car or eaten by predators such as rats and cats. We took the hatchlings to a safe spot on the beach and released them. I also had to prepare for the expected swells as Hurricane Ida passed us by: when beaches flood, nests can wash away. We took rescued eggs and premature hatchlings to a makeshift intensive-care unit until they were ready for release. We aim to leave no turtle behind.

I have worked at the project for 15 years. I recently finished a master’s degree on the coloration of the Barbados bullfinch (Loxigilla barbadensis) at the University of the West Indies, which hosts the turtle project. Next year I hope to start a PhD, part of which will look at the conflict between tourism and sea-turtle survival in Barbados. Here, interactions between sea turtles and humans occur at every stage of the turtles’ lives and can affect their survival. After my doctorate, I will continue to focus on helping sea turtles in the Caribbean. There is something addictive about making a real-time, tangible difference to their lives.