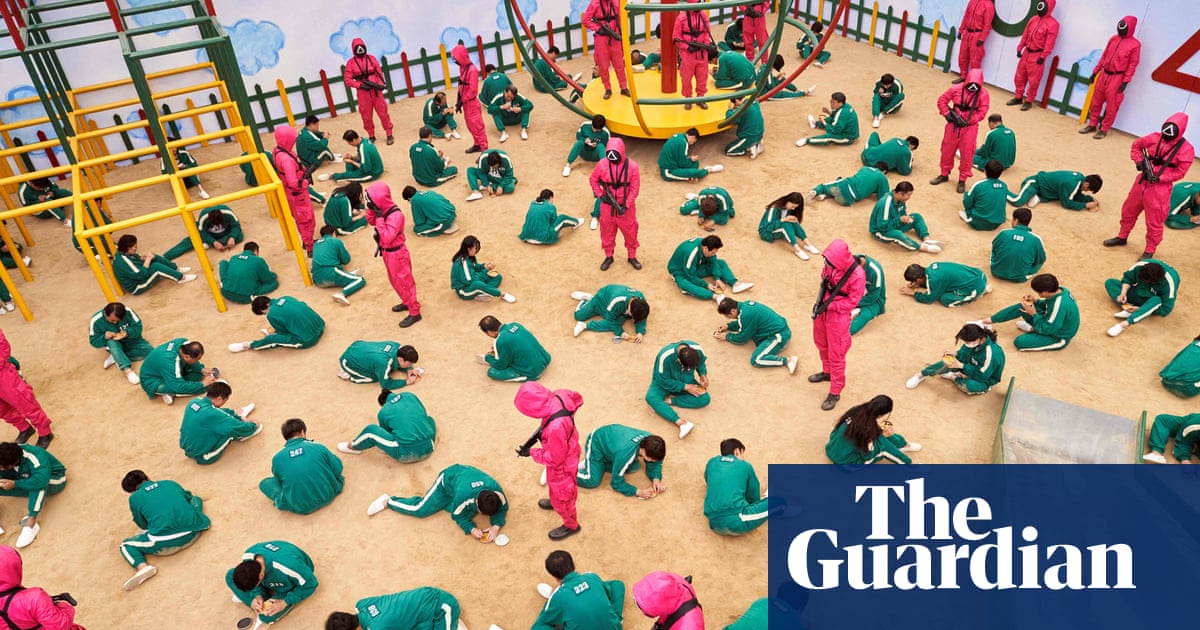 After midnight, when the crowds of revellers have gone, Choi Young-soo* crouches in a shabby alleyway in Seoul’s wealthy Gangnam district. This is the only time that the 35-year-old, a part-time food delivery rider, dare leave his tiny room at a cheap hostel he shares with about 30 other people.

The rooms, he says, are “only slightly bigger than coffins”.

In a fictional world, Choi would not be out of place among the contestants on Squid Game, the wildly popular South Korean dystopian drama that pits the heavily indebted against each other in a macabre, blood-spattered race for an unimaginably large cash prize.

But Choi’s desperate situation is real – he is one of a large and growing number of ordinary South Koreans who find themselves choked by debt, in a country where taking out a loan is as easy as buying a cup of coffee.

“I feel like other people sense that I’m a failure, so I only come out at night to smoke and watch the stray cats,” Choi says.

Squid Game, which was released on 17 September, is on track to become Netflix’s most-watched show ever, captivating viewers around the globe with its mixture of dark drama and commentary on the failures of South Korean-style capitalism.

Household debt in South Korea has risen in recent years and is now equivalent to more than 100% of GDP – a level not seen elsewhere in Asia.

Indebtedness has gone hand in hand with a dramatically widening income gap, exacerbated by rising youth unemployment and property prices in big cities beyond the means of most ordinary workers.

As Squid Game illustrates, a sudden redundancy, a bad investment or simply a run of bad luck can force people to turn to high-risk lenders just to keep their heads above water.

The series’ popularity is proof that the misery of crushing debt is a universal experience but, according to Lee In-cheol, the chief executive of the thinktank Real Good Economic Research Institute, its Korean backdrop is far from coincidental.

“The total amount of debt run up by ordinary South Koreans exceeds GDP by 5%,” he says. “In individual terms, it means that even if you saved every single penny you earned for an entire year, you would still be unable to repay your debt. And the number of people with debt problems is rising at an exponential rate.”

In response, the country’s financial services commission and financial supervisory service recently resolved to prevent more South Koreans from falling into debt. “That is why major banks have acted to curb borrowing,” Lee said. “But is that really going to help people, especially in the middle of the Covid-19 pandemic?”

Like many of Squid Game’s 456 fictional contestants, who are invited to play Korean children’s games and risk their lives in the process for a 45.6bn won (£28m) prize, Choi’s plunge into indebtedness came with alarming speed.

Just two years ago, he was working as an IT engineer for a firm in Pangyo – South Korea’s answer to Silicon Valley. Years of punishing overtime and late nights took a toll on his health. After lengthy discussions and a year spent planning and saving, he and his wife decided to open a pub in their home town, Incheon.

It was a decision they would regret, despite their modest ambitions. “We weren’t hoping to become millionaires,” he says. “We would have been satisfied with earning the same as before. All I really wanted was more sleep … even an extra hour a day.”

After an encouraging start, their business fell victim to the coronavirus pandemic. After bars and restaurants were ordered to close as early as 9pm to prevent the virus from spreading, the number of customers reduced to a trickle, then dried up altogether.

“Sometimes we didn’t have a single customer,” Choi says. “It was just the two of us, playing loud music to cheer ourselves up, even though we knew that would mean higher electricity bills. But we couldn’t switch it off.”

After failing to pay their rent for four months, the couple knew they were testing their landlord’s patience and sought help. Securing a bank loan was surprisingly easy, but they were shocked to find the interest was a steep 4%.

Within months they had taken out loans from all five of South Korea’s high-street banks, using their home as collateral. Inevitably, they had to borrow more to pay off existing loans, joining long queues of troubled business owners eager to secure cash from commercial lenders at interest of more than 17%.

“By then, I no longer cared about how high the interest rates were,” Choi says. “I was getting so many calls and text messages demanding that I repay my loans. It took over our lives. My wife said she even heard me muttering about interest rates in my sleep.”

In a desperate attempt to pull themselves out of their downward spiral, Choi’s wife found a job at a restaurant in another part of the country, and the couple asked his parents to look after their two young children.

Choi says he has heard a lot about Squid Game, but is unable to become part of the global frenzy that has helped the nine-episode show amass tens of millions of viewers.

“You have to pay to watch it and I don’t know anyone who will let me use their Netflix account,” he says. “In any case, why would I want to watch a bunch of people with huge debts? I can just look in the mirror.”