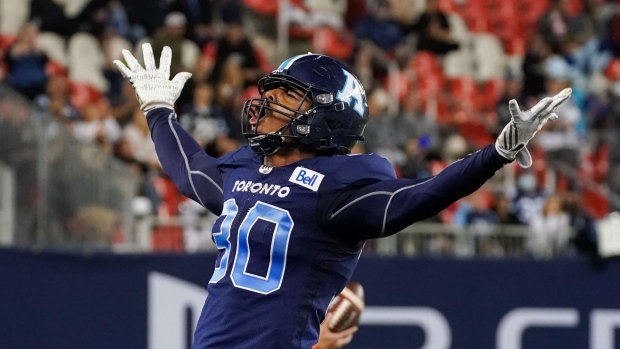 TORONTO — D.J. Foster and the Toronto Argonauts don't have much time to enjoy being atop the East Division standings.

Foster had a 63-yard TD catch while Dexter McCoil Sr. and Chris Edwards both returned interceptions for touchdowns in a wild third quarter as Toronto defeated the Ottawa Redblacks 35-16 on Wednesday night. The Argonauts (5-3) took sole possession of first in the East, two points ahead of the Hamilton Tiger-Cats (4-4).

But the Argos can't rest upon their laurels. They face the Ticats on Monday at Tim Hortons Field.

"For the defence to go out there and make big plays and take the game into its hands is huge," said Foster, who ran for 65 yards on 18 carries and had five catches for 79 yards and the TD. "It definitely takes a little weight off our shoulders but we've still got to reload as an offence and come out strong and fast next game especially."

Toronto outscored Ottawa 27-0 in the third before a BMO Field gathering of 6,788. The Argos improved to 4-0 at home and have won six straight there overall, the first time they've done that since 2004.

McCoil Sr. corralled a Caleb Evans pass tipped by defensive lineman Cordarro Law and returned it 71 yards at 7:22 to put Toronto ahead 21-9. After McLeod Bethel-Thompson's 21-yard touchdown pass to Damion Jeanpiere at 11:30, Edwards ended the quarter with an 82-yard pick-six that gave the Argos a commanding 35-9 lead.

Foster's TD at 2:44 began the onslaught. The two-point convert was unsuccessful.

Toronto recorded two pick-sixes in a game for the first time since 2006. And the last time they scored TDs in all three phases (offence, defence and special teams) was 2004.

It was a tough second CFL start for Evans, who finished 23-of-41 passing for 334 yards and three interceptions with 54 yards rushing on six carries.

Last week in his pro debut, Evans completed 15-of-22 passes for 191 yards and three TDs and ran for 59 yards in leading Ottawa past Edmonton 34-24 to snap a five-game losing streak.

But football wasn't the only thing on Evans's mind Wednesday. Earlier, his younger brother, Titus, was evacuated from Timberview High School in Arlington, Tex., where four people were hurt in a shooting there.

Evans said his brother was fine. The Associated Press reported an 18-year-old student was arrested and faces three counts of aggravated assault.

"I found out at about 11 (a.m.)," Caleb Evans said. "I texted my brother as soon as I found out on Twitter to make sure he was OK.

"He texted back, telling me all the details. It's very sad to see that happen. I'm still not exactly sure what happened, but I'm just glad everybody back home is safe."

"He moved the ball well at times," LaPolice said. "We weren't consistent enough offensively and then turnovers kind of plagued us."

Bethel-Thompson finished 15-of-21 passing for 181 yards with an interception while improving to 3-1 as Toronto's starter. But the Argos' offence mustered just 253 yards, compared to 406 for Ottawa.

"We couldn't get lined up, we couldn't block the right guys," said Toronto head coach Ryan Dinwiddie. "It was one of the worst offensive performances I've seen and those guys know it.

"I didn't rip them at halftime . . . there's no reason to get after them on game day. But we've got to be a whole lot better than that and there's some guys who need to get better or they're not going to be here."

Toronto did keep Ottawa returner DeVonte Dedmon from scoring. Dedmon had returned punts for touchdowns in each of the Redblacks last two contests.

Dedmon came in having registered four return TDs in 11 career CFL games. Only Calgary's Derrick Crawford, who had four kick-return TDs in his first 10 games of 1990. did it faster.

"Our special teams were phenomenal," Dinwiddie said. "Those guys swarmed to the ball, flew around and made some real good plays and then the blocked punt was huge for Dejon to get that.

"Defensively they're practising and trying to score all the time. That was big-time for those guys to kind of put it out of reach when we (offence) weren't doing our part."

Rookie receiver Dejon Brissett recorded Toronto's lone first-half TD. First-year running back Dom Pellerin blocked Richie Leone's punt, which was recovered by Brissett and returned 23 yards at 11:40 of the second to put the Argos ahead 8-6.

But Ottawa's special teams were responsible for a TD. Frederic Chagnon recovered Brendan Gillanders' blocked punt in Toronto's end zone at 2:38 of the fourth to cut the Argos' lead to 35-16.

Ottawa got the ball back at Toronto's 48-yard line after recovering Chandler Worthy's fumble on the ensuing kickoff. But nothing materialized.

Ward's 32-yard field goal at 14:44 of the second staked Ottawa to a 9-8 halftime lead. It capped a smart 62-yard, nine-play drive after Brissett's TD.

This report by The Canadian Press was first published Oct. 6, 2021.